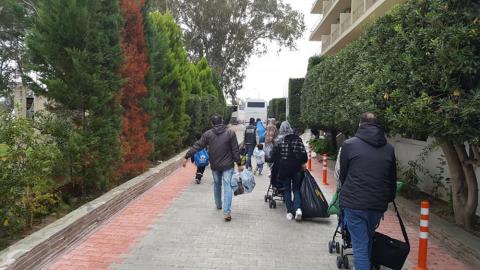 Athens – IOM (UN Migration) is providing temporary shelter and protection services to 2,518 vulnerable migrants and refugees who were transferred from the North-eastern Aegean islands to hotels on the Greek mainland.

Between 29 October and 3 December, an EU-backed action allowed IOM to provide safe accommodation and tailored services to the asylum seekers – including 1,086 women and 818 children – transferred to the mainland from unsuitable conditions on the islands of Lesvos, Chios, Kos and Leros. Under the government’s island decongestion plan priority is given to the transportation and accommodation of families with underage children, pregnant women, single parents and individuals with physical and mental trauma.

“Through the ‘FILOXENIA’ action, IOM is aiming to alleviate the suffering of vulnerable migrants and refugees by providing dignified living conditions for those currently living in deplorable conditions in the Reception and Identification Centres on the islands,” said Gianluca Rocco, IOM Greece Chief of Mission.

“We have been supporting the Greek government in the decongestion of the islands since last summer, and with European Commission support, our goal is to urgently create 6,000 temporary accommodation places on the Greek mainland.”

The majority of the vulnerable asylum seekers – 520 individuals – are housed at a facility in Porto Heli, in Central-eastern Peloponnese. In the Korinthos and Marathon areas, 417 and 386 beneficiaries respectively are hosted in hotels. Most of them are from Syria (711), Iraq (684), Afghanistan (380), Somalia (97) and Palestine (79).